The Russian River, in northern Sonoma County, is a natural force that brings life to the people, grapes and wineries along it's 115 mile run to the Pacific Ocean. When full and flowing, the river provides water for thirsty vineyards, as well as a place of recreation for locals and tourists.

Overflowing and raging along its course, the river can do serious damage to vineyards.  One year, heavy rains swelled the river beyond its banks, flooding the vineyards near Korbel on River Road.  Vine roots standing in water for a few days don't worry a vineyard manager as much as the fallen trees that wash down from nearby slopes into the vineyard.  Powerful currents send the logs crashing into vineyard posts and trellises, causing considerable damage.

Cool and often foggy best describes the climatic growing conditions along that section of geography where the Russian River and the Russian River Valley are one and the same. After flowing past Healdsburg, the river moves to the south, then heads west, before emptying into the ocean.

Pinot Noir and Chardonnay were first planted in the 1970s, and within 10 years became the two varieties that most identified the appellation.  Zinfandel also caught on but mostly at higher elevations such as in Martinelli's Jackass Vineyard. For years, the Russian River had more vineyards than wineries.

But, by the turn of the century, Russian River Pinot Noir emerged to become the best known from California, from wineries such as Gary Farrell, Williams & Selyem, Merry Edwards, Kosta Browne and Rochioli, to name just a few.

Either by design or by accident, the Russian River wine appellation became the Burgundy zone of California, countering Napa's reputation for Bordeaux-style wines and the dominance of Cabernet Sauvignon.  Being like Burgundy wasn't intentional, the comparison was just natural to the Old World standard for Chardonnay and Pinot Noir.

Russian River Pinots were darker, richer and more concentrated, while Burgundy was often lighter in color and showed more boiled beets and spice.  Ripe black cherries, the ones my mother used to call Ox Heart, best described a Russian River Pinot Noir.  As for oak, Burgundy always seemed to be more integrated with the fruit, while new French oak usually seemed to stand out more in a Russian River Pinot, or at least until the wine had time to knit together.

Sitting almost at the center of a triangular patch of land, bordered by the towns of Sebastopol, Forestville and Occidental, Green Valley is the coolest vineyard site in the Russian River Valley.

The sub-region was initially the Sonoma County-Green Valley AVA but later changed its name to Green Valley of Russian River Valley, still a cumbersome name that doesn't help consumers understand and remember the appellation.

Green Valley's reputation as a wine region got its first boost from the Sterling family, among the first to promote Green Valley as a prime site for Pinot Noir and Chardonnay, with a line of Iron Horse sparkling wines, that would go on to earn an international reputation.

Thanks to cool daytime temps and morning fog, Green Valley grapes develop crisp acidity and good structure. Green Valley is one of few sites in California where the climate is similar to Champagne. 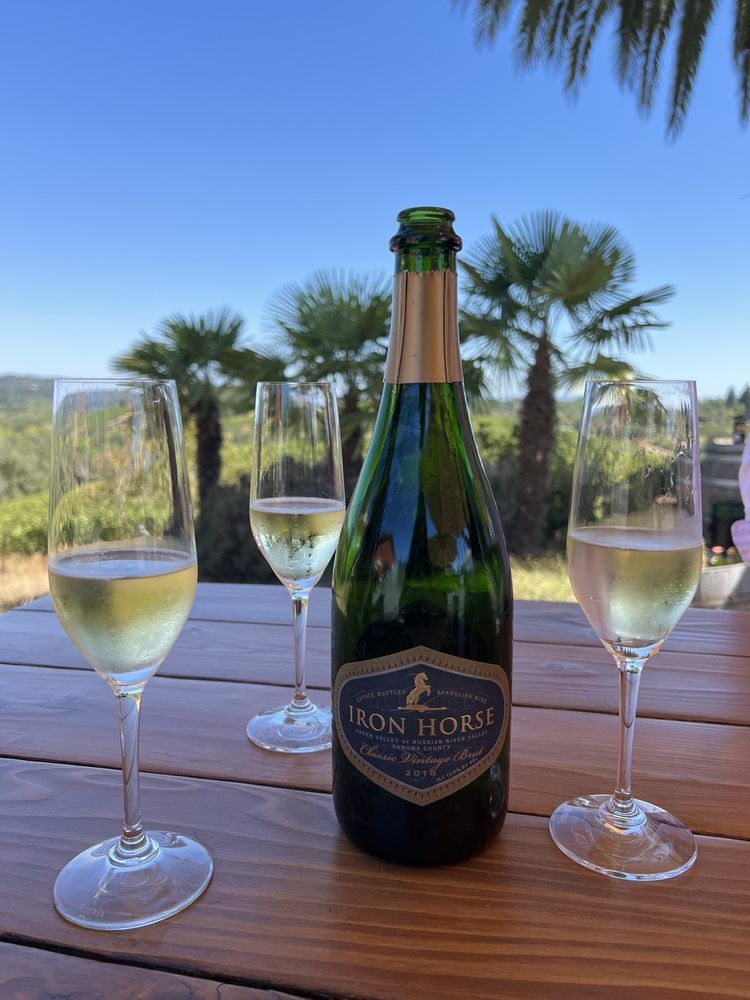 Green Valley grapes are mostly sold to wineries outside the AVA, but in recent years the sub region has attracted a growing list of wineries, devoted to making still wines, including Iron Horse, Dutton-Goldfield, Marimar Estate, Littorai, Hartford Family Winery and Orogeny.

A number of places in the Golden State have laid claim to top Chardonnay and Pinot Noir, but the sparkling and still expressions of the two varieties from the Russian River Valley and Green Valley are at the top of the list.

Next blog: A Most Extraordinary Tasting