"Man doth not live by bread only," is an old Biblical saying that aims to teach us that life is about variety. With a little imagination, the same adage might be applied to the variety of drink.

An article I read recently in the New York Times about Great Britain's fiscal problems battered by the effects of Brexit, the war in Ukraine, an unexpected round of Prime Minister musical chairs, and tanking of the British pound, left me dazed. But amid the turmoil, there was something positive: soaring sales of Scotland's whisky.

The mixed news from across the pond was, for wine fans, an opportunity to savor the essence of the grain while favoring the substance of the grape.

Wine is enjoyable and nourishing to life, but life would be dull and monotonous if wine were the only drink we had to enjoy.  So at one point in the history of wine, someone decided to add to the enjoyment by distilling wine, making brandy, Cognac, Armagnac, Port and Madeira.

In Scotland, a northern clime where wine grapes don't grow, man turned to locally grown grains, distilling a clear eau de vie, to fend off the chilly weather, and then later perfected a distillate of malted barley mellowed by time in oak into single malt whisky.

Scotch whisky, such as Dewars and Chivas Regal, is a blend of grain spirits and various styles of single malts: a Highland Bowmore, Lowland Auchentoshian and a peaty island malt like Laphroaig from Islay.

A single malt whisky is the product of a single distillation in what is known as a pot still, a copper vessel shaped not unlike a Hershey's chocolate Kiss. The pot still is topped by a long graceful arching pipe known as the swan's neck. Pot stills require recharging after each distillation.

Grain spirits are distilled in a continuous still. The continuous process allows a steady distillation without having to recharge.  Continuous, or Coffey, stills are normally used for bulk spirits.

Pot stills are loaded with a fermented liquid, consisting mainly of malted barley, the term meaning the germination of barley either by mechanical means or manually on a malting floor, a labor intensive process that unfortunately is disappearing.

Once through the still, a high-proof clear liquid is then racked into oak barrels for aging, the length determined by the style of whisky and the evaluation of the master distiller. Traditional single malts are aged in previously used Bourbon casks. A recent innovation has the initial aging in ex-Bourbon barrels with a finishing touch in Bordeaux, Port, Sauternes wood, to name a few.

Single malts fit neatly into three general categories: Highland, the category with the most distilleries and individual styles, such as Speyside and North Highlands; Lowland malts, mainly from the south, are generally considered the lightest; Island malts, a far-reaching category that includes the peaty single malts of Islay and the more subtle but distinctive malts from the northern islands of Orkney and Skye.

Wine is made by a similar sequence: raw material (grapes) crushed for juice that is then fermented and aged in oak barrels.  The oak comes from forests in France, Slovenia, Russia, Italy, United States and other places. The choice of oak is limited only by the available sources and winemaker preference.

Whereas wine continues to age in glass, once a single malt whisky is racked from wood to glass, the aging process mostly stops.  The component parts of whisky do, however, blend together in small subtle ways.

In recent years, single malt whisky has gone from a simple distillate of malted barley, aged in oak barrels, to a complex spirit of varying ages, seasoned in barrels that previously held a variety of wines, including red Bordeaux, sweet Sauternes, aged Port and more.  This variety is one of the reasons, whisky exports has grown in the least 12 months by 10.5% over the same period the year before.

Higher demand in world export markets, including the United States, has spurred a building boom in Scotland with the opening of 20 new distilleries in the past six years, according to the Times article. This surge has brought the total number of distilleries to 141, astonishing growth when I think of the few new distilleries (actually re-opened) in Scotland when I was last there 20 years ago.

Although the Times article didn't mention it, my sense is that a lot of the recent  growth comes from wine drinkers looking for a complimentary drink to wine that has the same variety of styles and flavors. 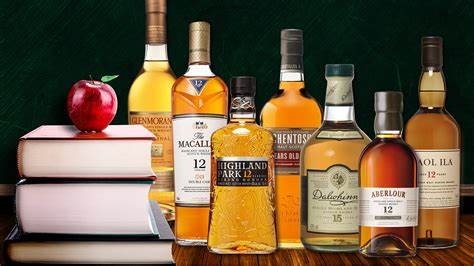 If you want to try a single malt, and still enjoy your wine, lift a wee dram of one of these wood-finished (mostly ex-Sherry barrels) single malts:

Curious readers may have noticed the spelling of the word "whisky."  The convention: Whisky is used for Scottish, Canadian and Japanese grain spirits, while spirits distilled in Ireland and the United States are called Whiskey.

Next entry: The Prosecco Phenomenon