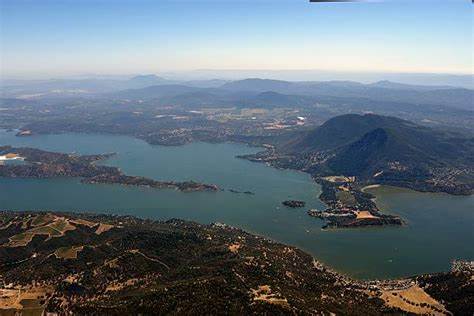 Heading north out of Calistoga, along a narrow twisting road that dips across low hills, then dropping down to Middletown, you arrive in Lake County, the smallest wine region in California's North Coast.

Prohibition dealt a devastating blow to the small wine industry in Lake County. Recovery started back in the 1970s and today 24 wineries are gathered around Clear Lake. Grape growers have carefully selected sites, based on terroir, that are ideal for growing wine grapes.

An Aside:  One of the major differences between American Viticultural Areas (AVA) and French Appellation Origine Controlee (AOC) is an AOC designated area may plant and use only prescribed varieties, such as Pinot Noir in Burgundy. American wineries have no such restriction and thus may plant and make wine from any grape they think will thrive in their area.  Consider the range of grapes grown in Lake County.

Such viticultural freedom is not valued by all French winemakers. Some believe it is better to concentrate your talents on perfecting one wine (Pinot Noir in Burgundy) then trying to make a line of wines.  American winemakers who make a excellent variety of white and red wines obviously don't agree.

Lake County is a hidden treasure, like Anderson Valley in neighboring Mendocino County.  Hidden is a fanciful way to describe Lake County, as it actually isn't hidden, but more like off the beaten path and for some people that live in Lake County, that's just the way they like it.

The feeling in Lake is that Napa Valley is too touristy, Sonoma, although more spread out, is still too busy for some.  Lake County, especially around Clear Lake where most of the wine action takes place, is laid back. Lake County winemakers are just as serious about growing grapes and making wine, but at a slower, more thoughtful pace.

Most of the major vineyards in Lake County are within the shadow of Mt. Konocti, a dormant volcano and the source of the distinctive rocky red soil that supplies the nutrients for Sauvignon Blanc, Chardonnay, Tempranillo, Nebbiolo, Petite Sirah, Mourvedre and Cabernet Sauvignon.  The other major influence is the tempering effect of Clear Lake, the largest fresh water lake entirely within California.

Nearly every winery in Lake County makes Cabernet Sauvignon, but a lot of the winemaking energy and excitement is going into so-called alternative red wines like Tempranillo and Mourvedre, the latter known sometimes by old-timers as Mataro.

Here's a look at the four most important Lake County AVAs and what wines they have to offer:

Red Hills Lake County AVA (2004) could be the sub-appellation of Lake County with the most promise. It has the soil and southwestern position along Clear Lake.  Cabernet Sauvignon and other red varieties are favored by the growing number of wineries in the Red Hills appellation.

Clear Lake AVA (1984) is one of the coolest wine regions in California, cooler even than Carneros and Santa Barbara. Half of the appellation is the lake itself,  a major influence on surrounding grape growing.  Sauvignon Blanc is the major variety.

Big Valley AVA (2013) has a long viticultural history going back to the 19th century.  Today, there are dozens of vineyards and six wineries in Big Valley, with Sauvignon Blanc the major grape.

High Valley AVA (2005) has vineyards at 1,600 to 3,000 feet planted in red volcanic soils. Cabernet Sauvignon is the major variety.

Clear Lake not only benefits vineyards, but it supports a thriving water sports industry, attracting players from Napa and as far away as the Bay Area.  Visiting a wine tasting room is a nice diversion after a day on the water, but if you can't get to Clear Lake, ask your local wine merchant for the refreshing wines of Lake County.