My Life in Wine Episoode 25

The last episode had MLIW veer off the path for a quick look at "A Winemaker in Training."  A directional correction is made in this Episode 25, putting the narrative back on course.

One of the many advantages of getting off the couch and traveling is travel takes you out of your comfort zone, exposing you to new experiences and unexpected encounters with strangers.

The enriching value of travel made an impression on me when I was an international wine judge in Sydney.  I was asked to do an interview with a local radio station, describing my impressions of being an American judging Australian wine in Australia.

Turns out, the interviewer was an American ex-pat who had moved to Australia years ago, becoming then, as she put it, "part of the woodwork."

While she was asking me questions, I was going over in my head: American or Canadian? Even listening to the accent, it's not easy to know unless you ask, and that's what I did when the interview was finished.

Travel gives you that advantage, even when the waiter in a Paris cafe notices immediately that you are not French (there's no fooling the French about the use of their beloved language) when you order a glass of vin de pays. 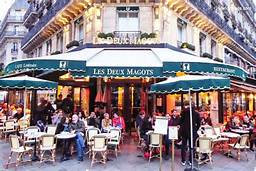 Travel has always been in my blood, so when I left the Wine Spectator, I began to travel.  My goal was to learn more about wine from the people that made it and how the local customs and environment had an influence over these practices.

Wandering the streets of Barcelona one evening, I spotted a wine shop.  Not a wine shop as I knew it, but one that, as it soon became apparent, sold more bulk wine than bottled wine.  Behind the counter were two large vats, painted green and red, each with a shiny brass spigot.

I found a place inside the shop, out of the steady stream of coming and going traffic and watched as locals brought their own demijohn or container to be filled with a fragrant red or white wine.

I'd never seen anything like it before and if I had not been in Barcelona on that day and at that time, when Barcelonians did their evening shopping, it's likely I never would have known that wine was sold that way. 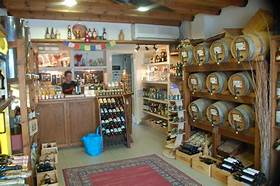 Seeing young and old Barcelonians get their wine in just about any container, reminded me of an evening in a gasthaus (tavern) many years before in Bonstetten, Germany.  While enjoying a beer, brewed on site, a young girl came in carrying an aluminum lidded container.  She handed the container to the gasthaus owner who filled it with foaming beer and the girl disappeared into the night to deliver the brew to her thirsty father.

Given the rigid U.S. laws on selling wine in open containers and to underage children, it's not likely that the Barcelona and Bonstetten scenarios would take place in the United States.

Small point?  Maybe, but it all adds to the wine experience and helps round out your wine knowledge.

Then there was another wine event in another country and time.  I was having dinner at a pleasant restaurant outside Florence, when a young couple, looking very American, was seated at the table next to me.

She pulled a copy of the Wine Spectator from a large tote bag and placed it on the table.  He began reading the wine list that had an impressive selection of Brunello di Montalcino, quietly reading the wines to her.

The waiter/sommelier, a man I had learned earlier who knew his Brunellos, came to their table and asked if they had made a wine choice.

"A Brunello," said the young man without looking up from the wine list.

After asking about their food choices, the waiter suggested a few appropriate Brunellos.  The young woman checked each suggested wine, with what I guessed was a list of Brunellos in the Spectator, whispering the rating to her companion.

I wanted to shout at the couple for ignoring the waiter's knowledgeable suggestions and for losing an opportunity to immerse oneself in local knowledge and learn something new from their travels to Italy.

Perhaps no other experience I had in my travels to learn about wine, unfolded one sultry evening, as the sun was setting, at a small cafe by the water in Sanlucar de Barrameda, in the Sherry region of Spain. 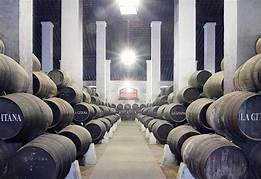 The setting: A small table in the shade of a sun-bleached umbrella, facing the sun as it disappeared below the horizon, flashing a kaleidoscope of colors.  On the table, a bottle of slightly chilled Manzanilla Sherry and a bowl of fresh shrimp. The briny-sweet shrimp and the dry, faintly salty and bitter, Sherry, was the perfect match.

Was it the place, the shrimp, the day or the wine that brought the occasion to near perfection?  I don't know but it was a sublime wine-travel experience!