Wine from a Narrow Country

Back in the Dark Ages of wine interest, that would be the 1960s or thereabout, the only Chilean wine I remember seeing in stores was a Riesling from Vina Undurraga, from the Maipo region. 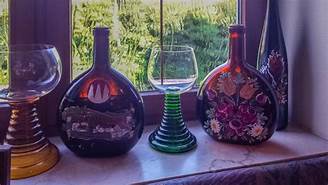 What attracted my attention then was the unique bottle that stood out for its shape from all the others on the shelf.  The folks at Undurraga must have thought their Riesling was similar to the distinctive wines of Germany's Franken region, so they put their wine in a Bocksbeutel, a special bottle in the shape of a flattened flask.

The bottle shape was a standout, especially alongside tall and slim German wine bottles. What I remember about the Undurraga wine was that it lacked the pale color and fresh fruit salad aroma and flavors of a Franken wine, which then might have been made from Sylvaner and not Riesling.

Since then, I don't recall many sightings of Undurraga wines, at least on the West Coast, even though the Chilean winery began exporting to the United States in 1903.

Today, Chile is a major player in the international wine market.  In 2013, Chilean wine production stood at 317 million gallons, with more than 75% of that exported. It has been said that one of the differences between the neighboring wine-producing countries of Chile and Argentina, is that Chile exports most of its wine, while the Argentines drink most of their wine; about 326 million gallons.

Chile is 2,670 miles long, from the Atacama desert in the north to Patagonia in the south, but only 217 miles wide at the widest point. It is this shape that makes Chile unique, especially for viticulture. The Pacific ocean is not far from many vineyards nor is the towering snow-capped Andes mountains that forms the spine of this long and narrow country.

Phylloxera vastatrix (the devastator), a small yellow aphid, was destroying the vineyards of Europe, but it never entered Chile, because of the country's natural barriers: desert in the north, mountains in the east, cold temperatures and snow in the south and an ocean in the west.

By the mid-20th century, Chilean grape growing and wine making had moved forward, thanks to the infusion of foreign capital and European know-how. As the industry grew, these initial wine regions became Chile's most important.

Aconcagua: Traditionally, the northern most fine wine region, that in recent years has been joined by more northern and smaller Choapa, Limari and Elqui.  Coastal breezes help to keep temperatures cool enough for Chardonnay, Pinot Noir and Sauvignon Blanc.  Vina Errazuriz is the best known name.

Casablanca: Situated between Valparaiso and Santiago, Casablanca is known for its cool climate whites, such as Sauvignon Blanc.  A short distance from the Pacific ocean, the area and neighboring San Antonio Valley produce some of Chile's best sparkling wines.

Central Valley: The heart of Chile's wine production is in the region called the "Central Valley."  Although not an actual named wine zone, the Central Valley includes such noted sub regions as Maipo, Maule, Curico, Rapel and Colchagua. Red wines predominate, especially Cabernet Sauvignon and Merlot.  Also important are Carmenere and Sauvignon Blanc.  Among the best known names from this large region are Las Vascos, Vina Montes, Casa Lapostelle and Santa Rita.

Before fine table wines, there was pisco and mate.  In fact, both drinks are still popular in Chile and Peru.

Pisco is a colorless high spirit brandy, distilled to about 40% abv and made from a variety of grapes, including Muscat, Torrontel and Pedro Jimenez.  Peru and Chile have been engaged in a long-standing dispute over the origin of pisco.  There is a long list of cocktails made with pisco, but the Pisco Sour one of the most popular.

Mate, or Yerba Mate, is a tea-like drink, made by soaking yerba mate leaves in hot water.  The drink, said to have a mild calming affect, is served in a calabash gourd with a metal straw.  ADD

Next blog: Wine and Music