How did you get into wine? 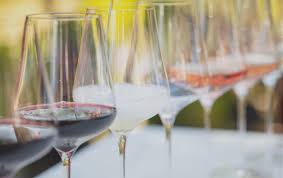 "How did you get into wine?" is a question I hear a lot.  The H question fills most wine writers with dread, similar to the way we feel when someone asks, "What's your favorite wine?"

I know, I know, I should be a little more appreciative and a little less cranky, since, after all, I taste wine all day, travel a lot and eat fancy meals.  Well, not exactly, but I get the point.

People are sincere in their curiosity, but the H question begs a response in twenty-five words or less; they want the bottom line, not a long story.  So I thought I would take a stab at explaining how I got into wine without, hopefully, raising the boredom level too much.

My earliest memory of wine in our house was my mother taking the occasional glass of Port because she thought it would "build my blood."  Mom's tipple was not Port from Portugal, but likely a deep ruby wine from New York's Finger Lakes, made from local grapes and fortified with brandy.

After dinner, mom would relax a few minutes in her favorite chair, maybe smoke her one cigarette of the day, while savoring a small water glass of Port.  I pestered her for a taste, but she wouldn't allow it,  And she made sure that I understood that if I sneaked a taste while she was at work, she would know. But all was not lost.

In my neighborhood, outside Philadelphia, wine usually came out of a glass demijohn kept in someone's cellar. This all happened only about 10 years after the repeal of Prohibition and people were experimenting with home made wine, usually in the unfinished space under their house, locally referred to as a "cellar."  No one I knew had a "basement" in our neighborhood.

But like many small provincial neighborhoods, there were secrets. One of those secrets a boyhood friend of mine shared with me was about his father's cache of home made wine in their cellar.  We used to sneak down there to see the bubbling liquid in a couple of large demijohns and the bottles of finished wine his father stacked on their sides in rows on the floor.  We were itching to pinch a  sample of this forbidden mysterious red liquid but had no idea how to get a cork out of the bottle.  And my friend said his father had warned him that the bottles were counted.

So, even though I didn't know it then, my curiosity was growing about wine.  But I would have to wait for my epiphany to happen at a railroad station cafe in France.

The French epiphany happened while I was on temporary assignment at an air base near Dijon.  Air Force food, even with French cooks, employed by the USAF, in the chow hall kitchen, lived up to its negative billing, so a colleague and I decided to have dinner in town at the train station cafe, which was reputed to be one of the best around.

It was a fortuitous choice because our waiter spoke English, knew something about wine and was only too happy to educate us in the finer pleasures of haute cuisine and good wine.

What was the wine of my epiphany?  Well, my memory is a little ragged and it has been 65 years since that evening in France, but I think the wine was a Beaujolais.  Deeply colored and scented, packed with fruit, rich and smooth, the first sip of that wine was a revelation that stayed with me, even to this day.

Back in Pennsylvania, and out of the Air Force, I thought about the life-lesson I had learned from my time in Europe...that life is so much more enjoyable with wine.

Circumstances, mostly beyond my control, caused a gap in the advancement to my life in wine. The job market in Philadelphia in the late 1950s was not good, so after marrying, I re-enlisted in the Air Force.  That meant a separation from wine for about five years, but then I was assigned to Northern California and got my first taste of wine from the Santa Cruz Mountains, the South Bay and Santa Clara County.

California varietal wines tasted different from those I had gotten used to in France and Germany.  It was a mind-expanding experience to discover that the Beaujolais of my epiphany was made from Gamay and the German wines I enjoyed at a Rhine wine festival were made from Sylvaner, or Riesling or maybe Muller-Thurgau.  And were the California Cabernet Sauvignons I tasted the same as Bordeaux?

From then on, my immersion in wine was gradual but steady.  After retiring from the Air Force, I eased into a second career as a wine writer, a job that took me around the world, learning about regional wines and how they are integral to the social and economic health of local communities.

From about 1993 to the present, my knowledge of wine increased many fold both as a writer and wine judge and educator, as my wine avocation became my vocation. I began writing for magazines and newspapers and did stints as editor of the Wine Spectator and Wine and Spirits magazines. Starting as a rookie wine judge at the Los Angeles County Fair, I continued judging wine throughout the United States, Europe and Australia.  Finally, I taught in the Wine Studies program at Santa Rosa Junior College.

And that is the not-so-short answer to how I got into wine.