"The delicacies of the season, flavored by a brand of old Madeira which has been the pride of many seasons...it drives away the heart-ache, and substitutes no hard-ache!  It would all but revive a dead man!" Nathaniel Hawthorne, "The House of the Seven Gables."

Portugal is known in the world of wine for two great fortified wines.  Port is one of them and the other is Madeira.

Madeira means "wooded," as the island in the Atlantic once was. According to one story, the volcanic island was covered by dense forests, so impenetrable that the first explorers had to burn their way on to the island.

That is one of a number of tales told about Madeira.  Here's another.  Traditionally, Madeira was a dry wine that just happened to be a big favorite in the American Colonies.  But a long sea voyage in the warm hold of a sailing ship was hard on the wine, so Madeira producers added a little brandy to the barrels.  During the long sea journey, the lightly fortified wine oxidized and the style of Madeira as we, more or less, know today was born. 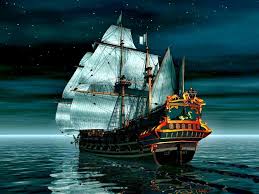 Digression -- By the 18th century, Madeira had become such a popular drink in the American colonies that colonists were buying about 25% of the island's production.  Madeira was held in such high regard that it was used to toast the signing of the Declaration of Independence.

Madeira is made from four traditional varieties, from driest to sweetest: Sercial, Verdelho, Bual, Malvasia (or Malmsey).  Today, the bulk of Madeira comes from the juice of the versatile Negramoll grape, while the four traditional grapes are mostly reserved for high-end Madeira.  When the island's vineyards were nearly wiped out by phylloxera in the 19th century, replanting of the traditional varieties was slow, but the heartier Negramoll became popular for its versatility.

Traditionalists say that while Negramoll makes good Madeira it lacks the aging qualities and finesse of wine made from the traditional varieties.

Before the development of modern grape processing equipment, the traditional way to crush grapes was in a lagar, a long rectangular trough, usually made of cement or stone. Barefoot cellar workers, usually in a circle and encouraged by music, would crush the grapes.  The bare human foot would gently break open the grapes without bruising the skins or breaking the bitter seeds. This practice was once common in the Port region and on Madeira, but has now mostly been replaced by mechanization.

Making Madeira starts with fermenting the must to make a base wine.  At a predetermined point in the initial fermentation, based on the desired sweetness and style, fermentation is stopped by the addition of a neutral grape spirit, or the wine is "fortified,"  then adjusted for alcohol strength.

Central to the making of Madeira is the estufa, or "hothouse" in Portuguese.  Estufagem is a system of stainless steel tanks, fitted with hot water or steam tubes, used to heat the wine, speeding the development and maturation. New wine warms in an estufa for at least 90 days. An alternative method heats the wine in large casks stored in a warm room. The nature of a wine made in  an estufa has coined the word "Maderization."

Digression -- Maderization is a term that is commonly used today to describe a wine that is heavily oxidized. This not accurate. Technically, maderization is the process by which a wine is made to taste like Madeira, usually involving mild oxidation and heat, such as Madeira.  The key phrase is "made to taste."

A small group of Madeira shippers do not use the estufa to age their wines.  Rather, the wines are kept in barrels, known as pipes, stored under the eaves of lodges, heated only by the sun.  These specially aged wines can remain in the lodge for 20 years and longer.

The modern estufa simulates the effects of a long round trip across the equator in the 18th and 19th centuries, when barrels of Madeira were stored in warm holds of sailing ships, bound for the American colonies and South America.

Understanding the styles of Madeira can be confusing. Until 1979, American hybrid grapes were used either alone or blended with Negramoll.  After 1979 the use of hybrids was illegal.  In  1993, the EU stipulated that varietal wines must be 85% of the named grape.

Sercial is usually the driest with a hint of almond and nervy acidity. Residual sugar levels, after fortification, for Sercial range from .5% to 1.5%.

Verdelho is a medium-dry wine, ranging in sweetness from 1.5% to 2.5%. with a citrusy tang and a trace of stone fruit, like peach or apricot.

Bual is grown in the island's warmer spots, yielding sweeter wines at 2.5% to 3.5% residual sweetness. Bual is a dark wine with a rich raisiny bouquet and flavor.

Malmsey is made from Malvasia grapes, grown in the warmest spots of the island. Malmsey, with a sugar range of 3.5% to 6.5%, is a complex, richly textured dessert wine with a hint of caramel.  Malmsey will age in bottle for decades.

It is a wonder that Madeira wine has survived, since the vineyards were hit by a triple whammy in the 19th century and early 20th century.  In 1851, powdery mildew (oidium) hit, followed by phylloxera. Then at the beginning of the 20th century, the economy tanked when the Russian Revolution and Prohibition in the United States closed down two major markets for the export of Madeira.

Madeira is a wine for the ages.  The finest examples will age for decades, with increasing layers of complex flavors.  If you haven't yet, now is the time to treat yourself to a glass of Marvelous Madeira.

Next Blog:  "How did you get into wine?"