"I dined with Stratford at a merchant's in the city, where I drank the first Tokay wine I ever saw; and it was admirable, yet not to the degree I expected."  Jonathan Swift, in "Journal to Stella"

Although he didn't know it at the time, Jonathan Swift was lucky to have had a taste of Tokay.  The mysterious Hungarian wine with purported medicinal properties was just becoming popular in the French court and the Russian imperial court, in the early 18th century.  Tokaj, though, was not yet that commonly seen in England.  Language and people being what they are, it wasn't long before English wine merchants changed the spelling of the Hungarian wine from Tokaj to Tokay and sales began to climb.

To avoid confusion between the two wines, references to the Hungarian wine will be Tokaj. Later in this essay, we'll take a brief look at Tokay and how it strayed far from Tokaj.

In northeastern Hungary, the name Tokaj is well known: there is a region, a town, a volcano and a sweet dessert wine, all bearing that name.  Records show that a wine called Tokaj was first made in the 13th century. It wasn't until the 18th century that the vineyards were first classified and the wine became well known outside Hungary, mainly among the nobility in France and Russia.

The imbibing of this unusual sweet wine in the royal court of the Sun King, King Louis XIV, prompted the king to crown Tokaj as "the wine of kings and the king of wines."

There are dozens of wines that derive their character and flavor from ripe grapes infected by botrytis, the benevolent rot that transforms a simple dry white wine into a sweet honeyed nectar.  Only three wines are considered the ne plus ultra of botrytized wines: French Sauternes, German Auslesen and Hungarian Tokaj.

Tokaj is made from six grape varieties, with Furmint and Harslevelu, the primary ones. The two grapes can trace their origin to the region of Tokaj.  There is a dry and sweet Tokaj, although the sweet version is the most popular.

Further, there are two methods of fermentation that have been in use for centuries. Dry and semi-dry wines are made in the usual way by pressing the grapes and fermenting the must (a mixture or grape juice and pulp undergoing fermentation) to dry, or with a little residual sweetness. Grapes for these wines are not botrytized and the wines may be aged in oak casks.

Digression -- Legend has it that heavily botrytized grapes were once brought to the winery and placed on a table with a concave surface and a small hole at the bottom of the inverted pyramid. The weight of the grape mass would crush the grapes causing the sweet juice to flow down and out of the hole, through a goose quill, into a container.

Also in this dry category is a classification known as Szamorodni, where the grapes are picked at a high sugar level, but the must is fermented to dryness, under a yeast that forms as a film on the surface of the wine.

The second method is the more complicated Aszu, a complicated process that amounts to a unique second fermentation. This is the classic sweet Tokaj, made from hand-selected botrytized grapes with a high concentration of grape sugars.  The botrytized grapes are soaked in fresh must or a newly fermented wine, then matured for at least two years in barrel.

Under the Aszu classification are a number of styles including a sweet Szamorodni that is barrel aged and lightly oxidized.  The pinnacle of Tokaj is Eszencia (also spelled Essencia), a heavily botrytized sweet wine that may reach sugar levels of 80% and takes years to ferment to 5% alcohol.  Aszu Eszencia is rare and expensive.

Digression -- A time-honored method of determining the Aszu Eszencia level was the addition of baskets of bortytized grapes (called puttonyos) to each barrel of wine.  The scale was 3 to 6 puttonyos, topping out with Escenzia. The puttonyos method is no longer used, although the number of puttonyos is seen on older Tokaj labels. 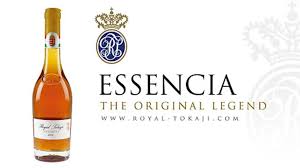 Entry level Tokaj, usually a varietal bottling, is available for $20 to $30 for the 750 ml from Hidden Treasures, Kikelet, Barta, Bodrog, Wezler and Simon Tiron.

Tokay -- The transition from Tokaj to Tokay is a relatively recent one that first appeared in California and Australia.  In the early years of the 20th century, California wineries used a grape called Tokay (sometimes Flame Tokay) to make a dry wine that was distilled as brandy.

Flame Tokay, curiously enough, was introduced to California in the 19th century from Algeria and despite its name, Flame Tokay has nothing to do with the dessert wine called Tokay, which can be made from any grape.

Tokay in Australia has a more lasting history.  In the state of Victoria, two great fortified dessert wines are made: one from Muscat grapes and the other called Tokay is made from the Muscadelle grape.  These are classic dessert wines, matured for years in old oak and enjoyed as an aperitif or as a dessert tipple.

Finally, for some unexplained reason, Pinot Gris was known in the Alsace region of France as "Tokay d'Alsace."  The name was outlawed by the EU effective with the 2007 vintage.

There are still some people, with a glass of Tokaj in their hand, easing out of a long day, claiming that the sweet wine has health benefits. Trure or not, Tokaj is a pleasure. Find your own reason to try Tokaj.