One of the unfortunate things, for the wine consumer, is as wine popularity grows, so too does demand and price for coveted wines.  And no where is this more noticeable than in Burgundy.

Upstart Chardonnays from new world regions like California were stylistically different from French Burgundy and they were less expensive. The standout feature in California Chardonnay was the use of oak. For Burgundies like Le Corton or Beaune Greves, the oak was an integrated component; there but not too noticeable.  For California Chardonnay, a list with too many brands to mention, the oak presence was often ripe and pungent; more in your face than subtle. 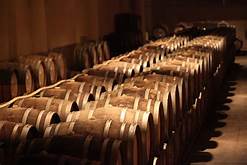 Burgundians continued to use oak with an even hand, but It would be years before California dialed back the use of oak; a handful of wineries went so far as to release no-oak Chardonnays.

What to do, then, if you wanted reasonably priced Chardonnay with a level of oak that didn't mask the bright mineral character of the wine?  Head south of Beaune to the regions of Maconnais and the Cote Chalonnais, known  primarily for producing moderately-priced Chardonnay, that has some of the same character as its more expensive neighbors to the north.

For help in sorting through the complexities of Burgundy wine, consult the official classification.  Not as well known as the Bordeaux Classification of Medoc and Grave of 1855, the Burgundy system rates top white and red Burgundy, listed as Grand Cru (Great Growths) and Premier Cru (First Growths).

Sidebar:  Following the evaluation of the terroir of each estate vineyard, plus wine making philosophy and how conscientious estate owners were of the operation and maintenance of their property, there was the politics, in determining what place on the hierarchy the property would rest.

Every decade or so, a small group, usually of dissatisfied estate owners (Burgundy uses the term "estate," the equivalent of "chateau" in Bordeaux) would lobby to have the official classification changed, with hopefully the elevation of their property.  Few challenges succeeded, although Baron Rothschild's tireless efforts in 1973 resulted in the elevation of his Ch. Mouton-Rothschild from a Second Growth to a First Growth, in the 1855 Classification.

While not a gauge of wine quality, the classification is an account of history and performance of those estates that have maintained a consistent high level of quality.

A "cote," in French, is a slope or a hill and that aptly describes the lay of the land throughout the Chalonnais, although the slope is not continuous as it is to the north in the Cote d'Or.  Still, the limestone-based soils are similar and it is this sameness that lifts Chalonnais Chardonnay closer to those of the Cote de Beaune.

There are five village appellations that usually stand on their own: Only Montagny produces solely white wine; Rully makes both white and red wine, plus small quantities of sparkling wine in the style of Champagne; Mercurey, arguably the best of the Chalonnais, and Givry are both known mainly for red wine, but also produce whites from Chardonnay; finally there is Bouzeron, a small area known for white wine made from Aligote, not often seen in the United States.

There are no Grand Cru vineyards in the Chalonnais, but a range of Premier Crus including in Mercurey, Rully and Montagny.

A small quantity of Pinot Noir is grown in the Chalonnais.  A Mercurey rouge, made from Pinot Noir is sometimes mistaken for a more famous Cote d'Or red.

Large quantities of Chardonnay are bottled as Macon or Macon-Villages.  A few of these better known villages make white wine under their own names, like Pouilly-Fuisse and St. Veran.

St. Veran gained its appellation in 1971 and picked up vineyards that were previously Beaujolais Blanc.  St. Veran Chardonnays are stylistically bigger and richer than Macon-Village, often representing good value.

The output of the Maconnais is approximately three to four times that of the Cote Chalonnais.  There are no Grand Cru vineyards in the Maconnais.

Small quantities of red Macon are made from the Gamay grape, drawing comparisons with nearby Beaujolais.  Bottled as Macon or Macon-Villages, the reds are scarce in U.S. markets.

Next blog: Rise of Shiraz