My Life in Wine Episode 18

My departure from the Wine Spectator opened the door to a return to free lance wine writer and a short stint as editor of Wine & Spirits Buying Guide.  Then in 1994, while free lancing for a short time, a surprise offer came from the San Francisco Chronicle. 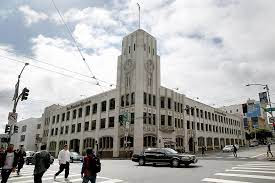 Encouraged by my friend and fellow wine writer, Diane Teitelbaum, I joined the food section of the San Francisco Chronicle as the staff wine writer. Even though I wanted the independence of free lancing, I couldn't pass up the opportunity to be the Chronicle staff wine writer.  Especially since there were no restrictions on outside writing, so long as the pub was not a competing newspaper.

For me, working at the Chronicle was a learning experience.  My only other newspaper experiences were an Air Force base newspaper and wine contributor to the Rocky Mountain News.

In those days there were not many staff wine writing jobs with U.S. publications, so the Chronicle was a step up.  But I didn't have a clue about the politics and pecking order of a big city newspaper.  An encounter with a star staff writer gave me a new perspective.

One day, I entered the busy Chronicle lobby, walked past the Herb Cain "loyal Royal" typewriter, enshrined as a tribute to the famous columnist and stepped into a waiting elevator.

"Hold the elevator!"  came a voice, more as an order than a request.  As the doors slid closed and we started up, the voice said, without looking at me, "Who are you?"

I turned with a smile, said my name and added that I was the new wine writer in the food department.  The elevator stopped at the second floor, the doors opened, and as he stepped out, the voice yelled over his shoulder, "I didn't know we had a food department."

The Chronicle City Desk was on the second floor, where all the main news writers worked, including my fellow elevator passenger, Phil Matier, veteran political reporter and columnist. Later, I was told by one food staffer that the comment was an example of Matier's abrasive personality, but another person said he was just taking the mickey out of the new guy.

Whatever.  I thought it interesting that Herb Cain looked down on the hallowed news room from his corner office on the third floor, next to the food department.

There wasn't space in the cramped food department, so the new wine section set up shop on the second floor, along with the test kitchen, of one of the old buildings that the Chronicle owned near the main one on Mission Street.

Schlepping cases of wine up to the tasting area was in a creaking pee-stained freight elevator.  Every trip was an aromatic adventure.  On one occasion, I chased away a drunk sleeping off a bender in the elevator.

Not long after starting at the Chronicle, I was asked to be on the Chronicle Tasters' Choice Panel, a small group of food professionals that met twice a month to taste and rate common food items -- corn flakes, mayonnaise, vanilla ice cream -- that could be found in any home pantry.

I was a professional wine taster, so how hard could that be?

Harder than I thought.  The average consumer usually doesn't taste eight different brands of mayonnaise before stocking one in their own kitchen.  Whatever brand condiment your mother bought for the family is generally the one you use.

The range of flavor and quality found in the various products sampled by the panel was surprising.  And tasting and evaluating food products was a lot like tasting different wines.  Corn flakes is corn flakes, right?  Not exactly.  Before tasting a line of corn flakes, the panel had to first decide on what a corn flake should look and taste like.

Wine evaluation is pretty much the same process.  Tasters first agree on basic standards for, say, Cabernet Sauvignon, as well as geographical growing differences and other factors.  Then, each wine is tasted and scored against these benchmarks.

The differences between brands of corn flakes, and other foods, often sparked vigorous debates with name brands not doing as well as expected. Consistent favorites often turned out to be house brands of major food chains.

Occasionally, the panel's opinion of a certain product raised the hackles of the producer.  Frozen yogurt was the last item on the list tasted at one session and a popular Bay Area yogurt got a low score.  The company was incensed and immediately shipped boxes of the frozen yogurt we had tasted to the Chronicle and all of the panel members, with a snarky suggestion that the panel didn't know from frozen yogurt and we should re-taste.

The Chronicle stood by the ratings and eventually the yogurt maker let it go.

Frozen yogurt aside, the Tasters' Choice Panel became one of the most popular features in the already popular Chronicle Food section of the newspaper.  It made sense, then, to start a Chronicle Wine Tasting Panel.  More on that in the next episode.

Next blog: Comparing Albarino and Viognier