Single variety wines or blends, which one is best?  The question has troubled wine drinkers for years and while most people would agree that it's a matter of personal taste, there is one historic example that may help an undecided wine drinker to come down on one side or the other.

California winemakers started building a reputation for red wine with 100% varietal wines, such as Cabernet Sauvignon. About 35 years ago (can you believe it!) a shift toward blends began to build steam, and in 1981, the Meritage Association (now Alliance) was formed to distinguish those red blends made from two or more of the Bordeaux grapes from other red blends. There is also a white Meritage.

For more than one hundred years, winemakers in Bordeaux have relied on a blend of up to five grapes to produce a red wine that has become a benchmark around the world. French winemaking is regulated by the Appellation d'Origine Controlee, known commonly as AOC.  One stipulation for Bordeaux AOC is that wines are not identified by a single variety, but as a blend of at least two of the five authorized red grapes.

The five grapes, in order of planted acreage are: Merlot (the most planted), Cabernet Sauvignon, Cabernet Franc, Petit Verdot. and Malbec. Carmenere, an historic red grape in Bordeaux, is also an accepted red grape, but it is a minor player today.

The decision to  plant which grapes where was based mainly on the terroir and geography of each of the major wine districts. Hugging the left bank of the Gironne esturary is the Medoc, the largest of the major districts  and arguably the most important. Within the Medoc are such noted sub-appellations as St.-Estephe, Pauillac, Saint-Julien and Margaux. South of the Medoc and the city of Bordeaux are Pessac-Leognan and Graves.

Terroir is the French term for all of the natural factors, such as soil and topography, that influence a vineyard site.

On the right bank, closer to the Dordogne, are St. Emilion (and its sub appellations such as

St. Georges-Saint Emilion), Pomerol and Lalande-de-Pomerol. Tempering the sometimes harsh climate of Bordeaux are the Atlantic, the Gironne estuary, the Garonne river that feeds into the Gironne and to the northeast, the Dordogne river.


Not all five red grapes are planted in all parts of Bordeaux. Cabernet Sauvignon and Merlot are the major red grapes along with a little Petit Verdot, in  the Medoc and Graves.  There is virtually no Malbec left in the Medoc. Merlot and Cabernet Franc predominate in the cooler right bank soils of St. Emilion and Pomerol.

(Tasting Chateau Latour. I have long admired the elegance and complexity of Ch. Latour, so I jumped at the chance to attend "La Fete du Chateau Latour," an impressive two-day tasting of 89 vintages of Latour, from 1861 to 1979, in 1981 at the Four Seasons Clift Hotel in San Francisco. The marathon tasting was led by Michael Broadbent, M.W., then of Christies Auction House in London. 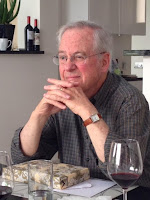 To say that this was a once-in-a-lifetime experience, is an understatement, for which I was not sure I was up to...but I was anxious to give it a try.

Perhaps it's a stretch to say that a wine more than 100 years old still shows vitality and length, but it did!  This is a testament to the longevity of Cabernet Sauvignon, the talent of the winemaker and the positive merits of a blended wine.  But it is also a plea not to drink your wines too young.

What impressed me, besides the wines, was Latour's consistency of style, year after year, especially when you consider how many maitre de chais (cellarmaster) were trusted with that style. And, even considering a tweaking of the blend to account for vintage differences, the power of Cabernet Sauvignon came through, supported by Merlot's softening fruit.)

What's the take away?  That can best be answered by looking at what each of the five Bordeaux grapes contribute to a blend.

With blends, the sum is more pleasureable than the individual components, but if the characteristics of one of the five Bordeaux grapes strikes your fancy, then go with the single variety wine.

Please contact me at boydvino707@gmail.com for my policy on submitting wine samples. Unsolicited samples will be returned to sender.

Next Blog: Making Wine with Wood