Napa, then and now 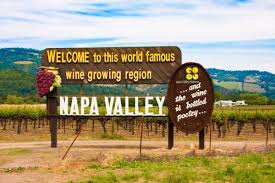 Although I'm not a resident of northern California anymore, I still like to keep up with the latest from wine country.  Recently, an interesting article in Time magazine caught my attention.  Time placed the Napa Valley on its list of "2021 World's Greatest Places."

"Greatest" can be a questionable honorific awarded by an unknown person or persons. Moreover, "greatest" lists are open to broad interpretation.

Webster defines "great" as "much higher in some quality or degree; much above the ordinary or average."  So is the claim of the "world's greatest" over blown?  Perhaps, by today's standards, the Napa Valley is great.

But the honor stirred some memories of the Napa Valley at a time when things were decidedly different in the valley.

In 1977, fallout from the seventies wine boom was still being felt and, as a wine writer, I needed to get up to speed on what was going on in California.  So, I contacted a professional photographer friend, who I knew from the Air Force, about going with me on a road trip to California wine country.

The plan was to spend a few days visiting wineries in northern California.  The trip began with me flying from Denver to San Diego and then Jack and I headed north in his VW Beetle for appointments at Heitz Cellars, Stag's Leap Wine Cellars and Joseph Phelps, all in the Napa Valley, then Parducci Wine Cellars in Mendocino.  Finally, on the way back to San Diego, a stop at Chalone Vineyards in Monterey County.

I chose these wineries mainly for their Colorado connections, but also because the wines were personal favorites.  Heitz Martha's Vineyard Cabernet Sauvignon was a hot brand in those days and a big seller in Denver; Stags Leap and Parducci  had helped Denver's Ivancie Cellars get started and Chalone was just a great wine and a great story.

Motoring up H-29, in the mid seventies, past Yountville into the heart of the valley, I don't recall thinking the Napa Valley was "great."  Bucolic and open was more like it.

The Napa Valley had not yet exploded into the tourist magnet it is today.  According to "Visit Napa Valley," there are presently 550 wineries (yes, you read that right), 400 open for tasting by appointment, 150 restaurants and 130 hotels and small inns.

Now, my memory of those days is a little foggy; but we are, after all, talking about a time and place nearly 50 years ago.

I wasn't on assignment and travel costs were a consideration.  So we settled for the modest (then) El Bonita motel, on the south side of St. Helena. The place looked a little worn, but from what we could tell, there were few alternatives, except for a small hotel in St. Helena.  So, we dropped our bags in the rooms, got back in to the Beetle and scouted out the location of our visits the following day.

Not far from the El Bonita, we found a Heitz Cellars tasting room, set back from the Napa Highway.  While Jack was checking out the setting for photos, a Chevy Camaro convertible came racing down the gravel lane, braking to a stop before merging into the steady stream of traffic on 29.  As I jumped out of the way, I  recognized the impatient driver as Joe Heitz, the irascible owner of Heitz Cellars.

Without looking at me, he groused, "You damn writers are all the same, thinking all we have to do is wait around the winery for you to show up."  And with that, he gunned the Camaro and eased out into traffic.

Jack and I stared at each other, mouths hanging open and thinking that the encounter with Joe Heitz was a rude way to start our Napa Valley visits.  So, we had dinner at the Grapevine Inn, got a good night's sleep and prepared for the unexpected at Heitz Cellars and hopefully a better welcome at Joseph Phelps.

The following morning we found Heitz Cellars, set back off the Silverado Trail.  We were a little early, so we poked around the reception.  We didn't have to wait long.  Heitz rushed into the room, and barked "Good morning," but with a smile and an extended hand.  Compared to the encounter the day before, we were treated like long lost cousins.

Joe Heitz was a good interview because he spoke his mind and answered questions directly without first thinking of local valley politics. I had asked him about the source of the eucalyptus character in the Martha's Vineyard wine.

"It comes from the nuts or seed pods getting in the soil," he explained.  "When I worked in the Central Valley, on days when we picked, the large hopper trucks full of grapes were parked in the shade under eucalyptus trees, waiting for processing. Leaves and nuts would fall off the trees and get mixed in with the grapes and I don't ever remember those wines tasting like eucalyptus."

"But that doesn't explain the eucalyptus character in the Martha's Cabernet," I pressed. "There are eucalyptus trees along the sides of Martha's and over the years, what fell off the trees got mixed with the vineyard soil," he said.

We concluded the interview, got a few photos of the reluctant Heitz and said good bye, and headed to Joseph Phelps, then Stags Leap Wine Cellars, followed with a drive north to Mendocino and a visit with John Parducci.  Our last stop was Chalone Vineyard in the hills above Soledad.

Next blog:  Napa, then and now Cont.