"Excellent wine generates enthusiasm.  And whatever you do with enthusiasm is generally successful."  Phillippe de Rothschild, French vintner

In the late 19th century, when gold was discovered in the Sierra foothills of California, a stream of adventurous entrepreneurs arrived in the Golden State seeking their fortune, not by panning for gold, but by providing the necessities to the hardworking miners.

One of those necessities was wine, a rustic tonic to take the edge off the hard-scrabble daily grind of dig, dig, dig, with nothing to show for all the hard work.

Recorded evidence shows that vines were growing in the foothills, alongside mine encampments that sprouted up like Angel's Camp, Murphys and Fair Play.  Miners were thirsty and there seemed to be no shortage of amateur winemakers to help the miners slake their thirst after a long day panning or wielding a pick and shovel.

Those days, of course, are part of California history.  But while the gold soon disappeared, Sierra Foothill wine making expanded.  The political region sprawls along the western edge of the Sierra Nevada mountain range, including these six counties: Amador, Calaveras, El Dorado, Nevada, Mariposa and Yuba. The Sierra Foothills American Viticultural Area (AVA) also takes in all six of the counties, but in wine terms, it's really just Amador, El Dorado and Calaveras AVAs.

Did You Know? -- American Viticultural Area (AVA) is the United States system of permitted geographical designations.  The AVA system is roughly similar to the French Appellation Controlee.

Within Amador County are two AVAs: Fiddletown and California Shenandoah Valley, both famous for Zinfandel.  Fair Play and El Dorado are the two AVAs in El Dorado County, noted more for Cabernet Sauvignon, Merlot and Chardonnay then Zinfandel.

Another example of contentious appellation differences was the use of the name "Champagne" by California wineries.  After years of objections by the Comite Interprofessionnel du Vin de Champagne (CIVC), established California sparkling wine producers, such as Korbel, were allowed to use the name "Champagne" on their labels so long as the winery identified their wines as "California Champagne."

Amador, and indeed vineyards throughout the foothills, are known for old vine varieties like Zinfandel, Grenache, Barbera and a few others.  Known single vines and whole vineyards in California have been documented at 125 years old. The term "old vine" has no legal definition and TTB, the federal regulatory agency responsible for labeling, has decided not to legally define the term, claiming too much variability.  However, the general acceptance is that any vine older than 40 years can be considered an old vine.

Amador County Zinfandels are well known for their concentrated berry flavors, owing in part to the efforts of wineries such as Shenandoah Vineyards and Montevina and to the persistence of Sacramento wine retailer Darrell Corti, who urged wineries to bottle old-vine Zinfandel.

Calaveras County AVA -- Calaveras is a sub-region of the larger Sierra Foothills AVA.  Centered around the historic town of Murphys, are about 20 wineries, including Newsome-Harlow, Stevenot and Ironstone Vineyard, producing Cabernet Sauvignon, Zinfandel and Syrah, plus a range of wines from Italian and Rhone varieties. 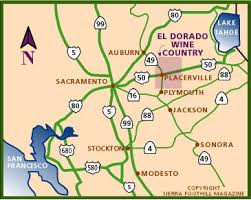 El Dorado AVA (1983/1987) -- El Dorado is a part of the Sierra Foothills AVA, one of the largest in California. Vineyards are planted at elevations up to 3,500 feet, in a rolling topography of hills and valleys. The cool mountain breezes and varying topography allow for microclimate conditions, just right for Zinfandel, Barbera, Syrah and a variety of Rhone varieties.

Fairplay AVA (2001)-- The vineyards of this appellation in El Dorado County are higher than those in Amador County, reaching up to 3,600 feet.  These conditions allow for a cooler leaner style of Cabernet Sauvignon, Merlot, Chardonnay and Riesling. There are 32 wineries in the Fairplay AVA, including Gros Ventre Cellars and Cedarville Vineyard.

Fiddletown AVA (1983/1987) -- Some of the settlers that had come west looking for gold stayed on and eventually planted vines along with other crops. The vineyards of Fiddletown, considered "The Heart of the Motherlode," are planted at 1,500 ft. to 2,500 ft.

Zinfandel is the signature Fiddletown grape, but the area is also known for Grenache, Barbera and Petite Sirah. There are just a handful of wineries, including Fiddletown Cellars and Damas Vineyards.  Ridge Vineyards, in the hills of Santa Clara County, established a reputation for distinctive Zinfandels, sourced from many vineyards, among them Fiddletown.

North Yuba AVA (1985) -- In a couple of ways, the Yuba County AVA is the outlier in the Sierra Foothills.  The appellation has less vineyard acreage than the other AVAs and it has only one winery, Renaissance Vineyard & Winery, which is a story in itself. Following some experimentation with different grapes and types of oak for aging, Renaissance established a reputation for award-winning dessert wines.

Generalizing about Sierra Foothills wine is meaningless, but one thing that can be said is that the region is known for robust and fruit-packed Zinfandels and attention getting Rhone-style wines.  When considering California wine, give yourself a break from the North Coast and head for the hills.

Next blog: Sicily: A Verdant Island of Contrasts