Following a few days in the hospital and a week in rehabilitation, I'm now at home recovering from back surgery.  While I was away from the computer, a renewed interest in pink wines once again has captured the attention of wine consumers.  So, with summer now officially here, let's take a fresh look at the pleasures of rose wine. 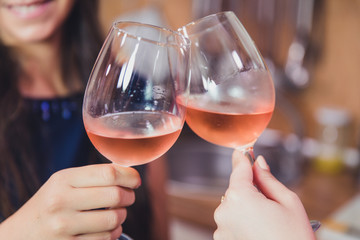 In the 1980's and early 1990's, few spots in the wine world were spending much time on rose wines, except for Provence Rose, Tavel Rose and Rose d'Anjou, all three from France.  The other pink wine that was popular then with Americans was Lancers rose from Portugal and it's main competitor, Mateus.

If Americans were drinking pink wine at all then, it was likely a bottle of Lancers or one of the French roses they had chilling in the fridge.  And there was the odd heavier darker "pink" wine from California that looked more like a light red than a rose.

Large California wineries like Almaden and Paul Masson were selling tanks of pink wines in jugs, but there was only a handful of small wineries bottling serious roses in 750ml bottles.  Small wineries making making notable roses then included Napa's Mayacamas , Pedroncelli in Sonoma and Fetzer and Navarro in Mendocino.

Beaujolais, both the real McCoy from France and a sporadic California homage, was big then and, of course, Chardonnay was just beginning its dominance of the white wine market.

The evolution of pink wine popularity likely started as a personal favorite of the owner or winemaker, that made its way to the public through the winery tasting room, or as a special wine for wine club members, until finally, through word of mouth, rose wines began to show up in wine stores and on restaurant wine lists.

Today, rose is on the up-tick again and according to industry reports, sales are booming.  "Shanken News Daily" reports there is strong competition in a crowded rose field, with vigorous growth at the $20 price point.

So what is rose wine all about and is it just another red wine?  Let's take a look.

There are a number of ways for making a pink wine, including blending a little red wine with white wine, but for the best rose, the preferred method is a short maceration of the juice with the skins of dark grapes, to get the desired color. The tinted juice is then fermented like a white wine.

Saignee is French for "bled."  The name is applied to a technique where a small amount of free-run juice is run (or bled) off until the desired color is achieved.

An alternative method is direct pressing of the dark grapes to arrive at a pink color that can range from almost colorless to a light red.

There also is Vin Gris, a pale pink wine, usually made from Pinot Noir in Burgundy and Alsace.

The idea is to  get a light fruity wine with a sweet-fruit impression, not oaked, that compliments light summer meals.

What follows is not a comprehensive list, but it does include the most commonly seen roses, with the majority coming from France, Spain and Portugal.

Cote de Provence -- A light dry pink wine made from Grenache and Cinsault, sometimes with a little Syrah and/or Mourvedre.  Brands to look for include La Vielle Ferme, Miraval, Chateau d'Esclans, Gerard Bertrand.

Rose de Loire -- A collection of pink wines from the Loire Valley of France, the most popular being Rose d'Anjou.  Grenache and Cinsault are the most common grapes used, although heavier, darker Loire pinks are made from Cabernet Sauvignon and Cabernet Franc.   Brands: Domaine des Nouelles, Marquis de Goulaine, Louis Laurent, Sauvion.

Spain -- Various varieties, such as Garnacha (Grenache) are used for a rosado (light pink) or clarete (darker pink).  Look for Chivite from Navarra and Torres from Catalonia, Bodegas Muga, Lopez d'Heredia,

Portugal -  Lightly sparkling and sweet, the most popular brands in the U.S. market are Lancers, the leader, and Mateus in its distinctive flask-shaped bottle that resembles the German bocksbeutel.

California and Washington -- Remember the "White Zinfandel" craze  in the late 1980's?  Well, the wine, popularized by Sutter Home, was not "white," but it sold like free money.  The market has moved on and now there is a slew of very good dry roses, many made from Grenache, in the market.  Look for these West Coast roses: Angels & Cowboys, Sean Thackrey, Ch. Ste Michelle and Charles Smith.

Of course, it need not be summer to enjoy a glass of rose, but for some unexplained reason, the heat and casualness of a sultry summer day, calls for a lightly chilled pink wine.

Next blog: My Life in Wine Episode 15