"We washed it down with a dark Spanish wine George Elbert bought by the gallon from an Asturian who got it off the Havana car ferry."  John Dos Passos The Great Days

Spanish white wines are not as well known or sought after as the reds, but as a group, the whites are as varied and appealing.

Red wine dominates Spanish wine culture. Spanish white wines have always been around, but were made mostly for local consumption.  White wines of Galicia, based mainly on the Albarino grape are a good example of a local wine that went public. Of specific interest is the sub zone of Rias Baixas, positioned between the Atlantic and the Mino (Minho in Portugal) river, that forms a boundary between Spain and Portugal. The local cuisine has developed based on seafood.

Spain grows a large number of both white and red wine grapes, in 17 "autonomous communities," each containing a number of provinces, including the Canary and Mallorca islands. Many of the grapes are obscure or grown only in one or two provinces, so we'll stick to those eight grapes and their associated wines that are the best known or have the broadest application in Spanish wine making.

In this essay we'll concentrate on Albarino, Macabeo, Moscatel and Palomino.  Then, in the Nov. 12 essay, the focus will be on Parellada, Pedro Ximenez, Verdejo and Xarel-lo. 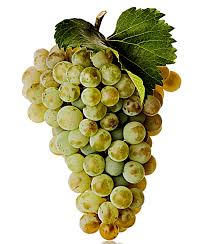 Albarino -- Galicia, in the cool, green northwest corner of Spain, is known for its white wine, fresh seafood and the cathedral city of Santiago de la Compostela, the last stop for religious pilgrims who started their long trek in France, along the Way of St. James.

Personal Experience: A few years back, on a trip to Galicia, I took a moment to wander the narrow passageways near the cathedral in Compostela. As I strolled along, looking in shop windows, the sound of foreign music echoed off the walls, growing louder as it moved toward me.  Around the corner came a young man playing a bagpipe, or more accurately, a gaita, the Galician bagpipe, an instrument that can be traced back to pre-Christian Celts.  Although I confess that I am a member of a small minority that enjoys the sound of bagpipes, I never expected to hear one in Spain.

Back at the cathedral, there was a group of road-weary people gathered by a low side door. Once a year, on the Day of St. James the Greater, a side door is opened, allowing pilgrims to enter the cathedral. That in itself is not so unusual, but on the left side of the door frame there is a wet spot, that reputedly never dries. According to Catholic lore, the mysterious moisture is not connected to any source or pipe inside the church and is believed by the faithful to be holy water.  As the pilgrims passed through the low door, they touched the spot and blessed themselves, bringing to an end their long pilgrimage along the Camino de Santiago.

Galicia benefits from the moderating Atlantic along its west coast as well as the Minho river in the south. Galicia is the home of some of Spain's most exciting and luscious white wines, mainly from the Albarino grape, grown mainly in Rias Baixas, or "low estuaries."

There are five sub-zones in Rias Baixas, where the rule is that at least 70% must be Albarino.  Blending flexibility permits Treixadura and/or Loureira, in any combinations.  Of course, international demand means that many wineries go with 100% Albarino.

So what does Albarino smell and taste like?  Peaches, apricots, with plenty of natural acidity and a trace of bitterness in the finish. My first taste of Albarino in Galicia reminded me of California Viognier, only lighter on the palate.

Godello is another Galician white grape showing a lot of promise. It displays  some of the same stone fruit flavors as Albarino, but with a bit more body.

Macabeo -- This widely-grown grape in northern Spain (not in Galicia) might accurately be considered an all-purpose white variety.  In Catalonia, Macabeo is blended with Xarel-lo and Parellada in Cava sparkling wines.  Navarra and Rioja winemakers rely on Viura, the local name for Macabeo, for their best white wine.

Macabeo is second in planted acreage only to the ubiquitous Airen. In Rioja there is considerable acreage of old-vine Macabeo, allowing winemakers the option of making a white with more aged character.  Indeed, Macabeo often needs time on the vine to counter the grape's tendency toward blandness.

When ripe, Macabeo is spicy and slightly herbal, valuable characteristics in a blend, although the variety can be light in acidity.

Moscatel -- In Spain, the name Moscatel applies to both a grape and a wine.  Moscatel is popular as a table grape, for its sweet simple flavors, which also apply to Mosatel wine. Most of the Moscatel grown in Spain is the Muscat of Alexandria. However, there is a small amount of Moscatel di Grano Menudo, a superior small-berry variety. The same grape name is used in both Spain and Portugal.

Despite being an easy variety to grow in Spain's warm climates, Moscatel, nevertheless, is an ideal variety for non-complicated sweet wines or as a sweet hand-to-mouth treat.

Palomino -- This white grape, more accurately called Palomino Fino, is most often associated with Sherry and the southwestern region of Jerez.  Also, small quantities of Palomino are planted elsewhere in Galicia and Castilla y Leon and is known in the Canary Islands as Listan Blanco.

Although Palomino grows best in warm, dry soils (Jerez), it is losing favor in Spain because of being susceptible to diseases, plus interest in Sherry is unfortunately dropping off.

Palomino in California was known for years as Golden Chasselas, a staple in Central Valley vineyards, but DNA profiling showed that Palomino and Golden Chasselas are not related.

The flavor profile of Palomino is simple, sweet and somewhat neutral, preferred characteristics for a fortified wine like Sherry, where varietal character is to be avoided.

Many of Spain's wine regions experience warm to hot temperatures, not the best conditions for many white wine grapes. Still, there is a growing list of white grape - Viura, Albarino, Godello -- that are proving to be the exceptions.

Got an idea for an essay topics?  Email me at boydvino707@gmail.com