My Life in Wine Episode 6


In Episode 5, I had spent a mostly wine-free year at a Republic of China Air Force Base, in Taiwan, then transferred to my first U. S. Air Force assignment on a flying base in South Carolina, working with the C-5A Galaxy. From there it was a complete change of gears with a hitch in USAF Recruiting Advertising and Publicity, an assignment that took me and the family back to Denver and a renewed effort at growing my future career as a freelance wine writer.

After many years of attending college classes between Air Force assignments, I finally got my bachelor's degree from Metropolitan State College (now Metropolitan University), Denver, in 1979.  For a graduation present, my wife Janet and I went to Europe. By then, our two oldest sons were out of the house and Janet's mother agreed to stay with their younger brother.

I had been to Germany and France courtesy of the Air Force, in the early 1950s, and also took a driving trip on my own throughout Italy, but except for my wine epiphany at a train station restaurant in France and the occasional glass of German wine, this would be a new wine experience for me. And it was Janet's first trip to Europe.

Months before we left Denver, I plotted a travel plan to wine regions in France, Germany and Italy, talked to some contacts about opening a few doors for us and wrote letters to wineries, asking for appointments. It seems quaint now to remember that business correspondence in 1979 was by letter and telephone and that you had to plan well in advance, allowing time for letters to get from Colorado to Europe and then wait for a reply.

So, 41 years later, here I am trying to remember where we went in Europe in 1979 and how we got there and back. For most memory lapses, I usually consult my Copy Editor (aka, Janet) and we both jog our short memories for detail.

There is an essential problem with recalling a trip you took so long ago, especially when you're both much older and when long term memory is supposed to be better than short term. Unfortunately, I no longer have the itinerary from the 1979 trip (Who would?), so I rely on remembering bits and pieces of the trip... although I'm not sure the bits and pieces are from the '79 trip, or another one or two trips I took to the same location.

You search for the right memory to fit the occasion and then: "Oh, wait a minute, wasn't it....?" Or you pause and then say with a chuckle, "No, that wasn't then, it was years later."  Finally, after an unproductive back and forth, moments of laughter, the fog begins to clear and details from the trip line up.

Eventually, my Copy Editor and I agreed to the best of our memories) on an itinerary for our first extensive wine trip to Europe. A caveat: The various wine stops may not be in the correct order, but I am comforted knowing you, the reader, don't know the difference.

Traveling on a writer's budget meant economizing, so we booked reservations on Condor, a German charter company, from Denver to Paris. After an hours-long delay, Condor got us there safely and in reasonable comfort.  I was only too happy to finally be on my way to see some of the wine regions and famous wineries I had only read about.

There probably is no better place in the world to decompress after a long flight than Paris. The first time I saw the City of Light was in 1955 when a friend and I drove from our Air Force station in Germany in my 1950 Chevy. We arrived late one night and were gob smacked at the energy of a city that seemed to be alive.  Except for newer cars and far more traffic, nothing much had changed in 1979 Paris, as we looked for our hotel.

A wine trade acquaintance had recommended a small hotel on the Quay Voltaire, across the Seine from the Louvre. "What a great location," we innocently thought back in Colorado. "What a disappointment," we cried that night, in our hot, stuffy room, overlooking the Seine and the endless stream of traffic below our open window. Every big truck in France, hauling produce into Paris overnight, would stop, start up, shift gears and accelerate...all night, until it seemed like the traffic was thundering through our room. We looked at each and asked, "Did you see that traffic light on the quay under our window?"

So, after a few days of seeing the sights, through a haze from lack of sleep, we rented a car and headed for Bordeaux, where we had two appointments: Chateau Greysac, a Grand Cru Bourgeois in the upper Medoc and Chateau Prieure-Lichine, a Fourth Growth in Cantenac-Margaux.

As it happens, Baron Francois de Gunzberg, the owner of Ch. Greysac lived in Paris and I had arranged a luncheon meeting with him before we left the city. Chateau Greysac was founded in 1973 by de Gunzberg and a small group of friends. Having never met a French baron, I didn't know what to expect, but he was entertaining and unpretentious, providing us with a little Medoc history and the directions to Greysac, just north of St. Estephe.

Unfortunately, directions were not the Baron's long suit, so we drove around for a while, looking for the village of Begadan, and finally, by accident, we pulled up to a small village grocery store, with a sign reading "Begadan." At the front of the store were two elderly men, in the traditional blue worker's clothes and rubber boots, having a nice chat.

Hoping that one of them, spoke English, I excused myself and asked for directions to Chateau Greysac.  Then, I stood there, shifting from one foot to the other, for what seemed like five minutes. "These men must be deaf," I said to myself. So, I repeated my question.

Finally, one of the men stood up, turned away from me, pointed down the road we had just driven up and mumbled what I think was "la gauche" and "kilometers."  Then he sat down and continued his nice chat.

Turns out we were not that far from the chateau and as we drove up to the chai, two grinning men came out to meet us.  One was the oenologist (winemaker) who spoke broken English and the other man was his Portuguese assistant who spoke no English. At one time, in Bordeaux, the wine was made by the maitre d'chai (cellarmaster), but today most chateaux have both an oenologist and a maitre d'chai.  In 1979, the Bordelaise did not use the title "winemaker." 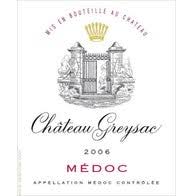 After some starts and stops, various hand gestures, a lot of laughs and a little help from my Copy Editor who called on her high school French, we toured the winery and tasted a few vintages of the wine, including a barrel sample of the final blend of mainly Merlot and Cabernet Sauvignon, with small percentages of Cabernet Franc and Petit Verdot.

Usually, a barrel sample is drawn by removing the bung, inserting a wine thief and with a thumb over the hole at the top end of the glass pipe, withdrawing the wine. The winemaker surprised me, though, by taking a hammer-like tool with a sharp point at one end and driving the point through the barrel head! Then, he raised the hammer handle slightly, releasing a thin stream of wine.  Once he had filled our glasses, he took a small wooden peg from his apron pocket and handed it to his assistant. Then, the winemaker quickly removed the metal punch, his assistant inserted the peg and, flipping the tool around, the winemaker hammered the peg home.

I couldn't decide if this was a trick to impress the visitor or if this winemaker routinely punched holes in expensive barrel heads.  At any rate, Greysac rouge out of barrel was impressive and bright, tasting very good for a young wine. The two older bottled wines, were even more impressive and just beginning to show some complexity. Ch. Greysac 2015 is priced at $20.

We waved goodbye, found our way back to the main road and headed back to Bordeaux city and our hotel.

In Episode 7, we visit Alexis Lichine's bedroom, sample Sauternes and foie gras near the Bordeaux airport, then take the long drive to Burgundy, south to Barcelona, back into France and more.

Next blog: How Much is Enough?